The struggles of ordinary people are not always loud. On the battlefields of everyday life,
they sometimes fight in silence and sometimes die in silence.

■ Asian Documentary Comics for Adults – Monsoon Vol. 3
At the end of 2017, Slowork Publishing launched Monsoon, a compilation of original Asian comics with non-fictional subject matter and distinct authorial styles. Following the widely acclaimed first volume and the second volume focusing on Southeast Asia, the third volume of Monsoon takes “A Quiet Battlefield” as its central theme and features stories of people who fight for survival and for their beliefs in all corners of the world, including:

a 17-year-old punk girl who lives every day like it's her last,
a young soul imprisoned by his brother's epileptic condition,
a documentary film director who works like a fighter,
interpersonal conflicts among war correspondents in Palestine,
absurd happenings at a funeral rite in rural China,
Vietnamese migrant workers who risk their lives to survive,
sex workers dealing with emotional injuries at work,
two Laotian sisters of Katu descent trying to make it in a big city,
Bunun people living on the margins of society and their beans grown on the margins.

■ Excerpts from and Introductions to Classic European Documentary Comics
Monsoon’s “International Classics” section is a must-read that introduces classic documentary comics unavailable in Taiwan and broadens the readers’ horizons. In the latest volume, the section features Epileptic, the autobiographical comic series first published in 1996, twenty years after it was first conceived by David B, a member of the New Comics movement in 1990s France, and If Today Is the Last Day of the Rest of Your Life, in which Austrian comic artist Ulli Lust depicts the days of her youth as a 17-year-old punk.

■ Outstanding Book Design by Prominent Designer Timonium Lake
In addition to using fonts with Asian characteristics and unconventional layout design that expresses rhythms, every chapter in this magazine is printed on a different type of paper and by a different method that best complement the style of the comic. The latest volume of Monsoon is once again designed by AGI member, renowned Taiwanese designer Timonium Lake, whose work enriches the readers’ visual and tactile experiences. 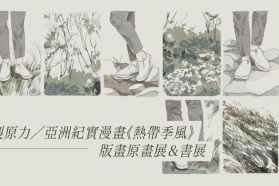